(CNN) — Back in the 1960s, Amsterdam city councilman Luud Schimmelpennink launched a plan to bring in 20,000 shared white bicycles to help combat the city’s traffic snarls and reduce air pollution.

The idea was for people to use the bikes once, then leave them for another person when they were done.

In theory it was a great program.

But things didn’t turn out as planned.

The council rejected the proposal. His supporters put 50 white bikes out on the streets anyways. Those that weren’t stolen or found abandoned in canals were reportedly impounded by police.

Seems Luud Schimmelpennink was ahead of his time. In the last 10 years, the number of cities offering bike share programs has skyrocketed.

Today, more than 600 cities deploy more than 700,000 bicycles to be shared by locals, according to the New York City-based Institute for Transportation and Development (ITDP). Of these, the largest systems are in China, in cities such as Hangzhou and Shanghai.

In most cases, users simply check out a bike with a pre-purchased membership card.

Their cards are billed according to how long they use the bikes, calculated when they check it in at the next bike share station.

Sounds like a great system for tourists to take advantage of, right?

Unfortunately for travelers, some cities have membership programs in place that require subscribers to have a locally issued credit card or proof of a local address.

In most cities, though, all you need is a credit card to sign up.

Of the some 600 cities now operating bike share programs, ITDPhas singled out seven for having world class systems, “hitting the mark with both high market penetration and high infrastructure usage.” 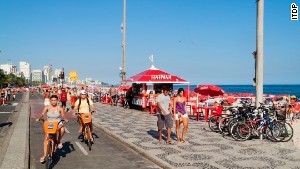 Rates are based on average number of daily uses for each public bicycle and average daily trips per resident within the coverage area.

More: 15 of the world’s most bike friendly cities

In alphabetical order, they are:

Unfortunately, Bicing is available by local membership only and not available for tourists.

This one’s off limits to those without a Mexico-issued credit card or proof of local address.

Tourists are free to use it.

Tourists are welcome to borrow bikes and can sign up online atEn.velib.paris.fr

Rio de Janeiro: The city’s Samba bike sharing program has 60 stations and 600 bicycles that average 6.9 trips per bike a day and 44.2 trips per 1,000 residents.

It’s open to anyone, though you’ll need someone who speaks Portuguese to help you sign up.

ITDP says shared bikes are a remedy for urban mobility issues such as traffic, air pollution, transit finance and the “last mile” problem of getting commuters to and from rail and bus stops.

“The vast majority of bike-share systems have all been implemented in the last 10 years.”

So what makes a bike share system a hit? ITDP says there are five critical elements:

Station density: A quality system needs 10-16 stations for every square kilometer, providing an average spacing of approximately 300 meters between stations and a convenient walking distance from each station to any point in between.

Bikes per residents: 10-30 bikes should be available for every 1,000 residents within the coverage area.

Larger, denser cities and metropolitan regions with an influx of commuters served by the system should have more bikes available to meet the needs of both commuters and residents.

Coverage area: The minimum area covered by a system should be 10 square kilometers, large enough to contain a significant number of user origins and destinations.

Quality bikes: Bikes should be durable, attractive and practical, with a front basket to carry bags, packages or groceries.

They should also have specially designed parts and sizes, which discourages theft and resale.

Easy-to-use stations: The process of checking out a bicycle should be simple.

The payment and authorization technology utilized should have an easy-to-use interface, a fully automated locking system and real-time monitoring of occupancy rates (to track whether more or fewer bikes are needed for each station).

Pedaling into the future

All successful systems share a pricing structure that gives locals an incentive to take them on short trips — usually a half hour or less — which helps maximize the turnover of the bicycles.

“Bike sharing is a post-ownership transport system that is environmentally sustainable, healthy and business-oriented,” says Hook. “It’s the transport of the future.”